The town of Tombstone, Arizona, began as a mining town back in 1877 by a prospector by the name of Ed Schieffelin. The name is said to have come from a comment made to Mr. Schieffelin when questioned about his frequent ventures out into the Apache wilderness to "look for rocks." One of the soldiers at Camp Huachuca (where Ed Schieffelin was staying) told him, "Ed, the only stone you will find out there will be your tombstone," and thus the name of a mine, nearby mountains, and a town "too tough to die" was born.

The City of Tombstone was built on a flat mesa that was known as Goose Flats prior to Ed's silver strike. It was surrounded by the Whetstone, Mule, Burro, Huachuca, and Dragoon Mountains. By 1879, Allen Street lots were selling for $5 each. The town boasted of forty cabins and a population of 100. The news about the silver strike spread quickly, and a year later in 1880, four town sites, of which Tombstone was the largest, were thriving in the mining district. In just two years the population of Tombstone would soar to over 5,000 people. It was during that same period of time that the Bird Cage Theatre, the Cochise County Court House, five local newspapers, the Crystal Palace, and Oriental Saloons were built—and the Gunfight at the O.K. Corral took place.

The most well-known event in Tombstone's history is the famous "Gunfight at the OK Corral," which actually took place in the empty lot next to the corral. This is where, on October 26, 1881, the members of the "Cowboys" gang had a run in with Wyatt, Virgil, and Morgan Earp and Wyatt's friend Doc Holliday. In only 24 seconds and 30 shots later, Billy Clanton and Frank and Tom McLaury were killed.

The Town Too Tough To Die

In 1882 the Cochise County Courthouse was built in Tombstone, and the county seat remained in Tombstone until 1929 when it moved to Bisbee. So, silver mining continued in the area, the mine shafts went deeper and deeper. Before it was all done, the miners would take $37 million worth of ore out of the mines in the area. But, at the 520 foot level, they struck the water table and the mines began to flood. The attempts to keep the water pumped out proved to be too expensive, and the towns residents began to move away. It is estimated that during the 1920s, the population had dwindled to approximately 150.

However, this once bustling mining town has grown popular as a place to visit an old west town full of history and evidence of a time long past. Its convenient location and mild, year-round climate makes it a great place to get a glimpse of that past. The town that identifies with the slogan "The Town Too Tough To Die" now enjoys a population of approximately 1,500. The entire town is like a walk through a wild and exciting Old West history. 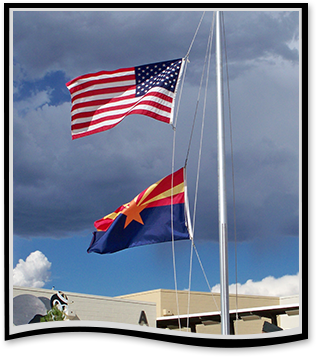